If the theory behind Kaisai no genri is correct, and there is independent historical information about Chinese martial art forms which suggests that it is, then a kata is a concatenation of multiple drill sequences. Each sequence which would deal with a common type of hazard and should take the practitioner from the initial position of weakness, through several movements to a position of strength.

If an individual drill sequence looks like the above, then the structure of a kata should look approximately as follows, with multiple variable length drill sequences strung together one after another.

When you add in an example embusen, then the sequences would no longer be in a line one after another but spread along the shape of the embusen of the kata, with natural changes in direction caused by the techniques, and by the choice by the creator such as the angle of attack given by the A components. In the example below, the B movement may have a natural turn which allows the kata creator to fit the sequence to the embusen. 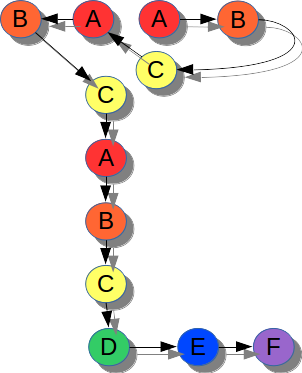 Drills within a kata

Combined sequences within a kata
Retrieved from "http://katapedia.shoutwiki.com/w/index.php?title=Structure_of_kata&oldid=684"
Categories: