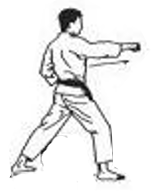 This video example is published on Youtube by Sensei Richard Poage of the Peaceful Warrior Martial Arts and Healing Center.