From katapedia
< Pinan
Jump to navigation Jump to search

The Pinan or Heian (平安) katas were created by Ankō Itosu some time around the turn of the 20th century, aimed at the Okinawan school system, it's unlikely they were created within a single year. It's reputed that they were based on an earlier lost kata called Channan, but this may simply have been a working name for what became the Pinan/Heian katas. 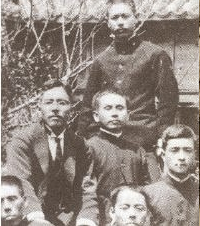 Anko Itosu in his 40s 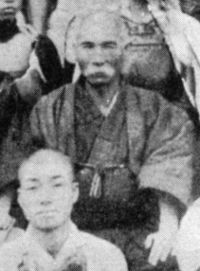 Itosu was a scholar of Chinese literature, and the naming of the katas likely reflects this. In Japanese the two characters (平安) are pronounced Heian and in the Okinawan dialect and in Chinese they are pronounced Pinan or Pingan. The Japanese translation of the name is approximately "peace and tranquillity" while the Chinese translation of the same characters is approximately "safe and sound". If this is the case then it's likely the name of Channan would also have had a similar sentiment in Chinese.

The Pinans are often seen as beginner katas. To some extent this is true, they are simpler to learn than the more complex katas which are typically taught later. The embusen is more structured, consistent and they are simpler to decode also; the drill sequences are far easier to find and define within the Pinans than later katas such as Passai/Bassai-Dai or Kusanku/Kanku-Dai because they very often run the same sequence both to the left and the right hand sides, it's relatively easy then to delimit the drill sequences within the kata. Also, the third sequence after the left and right examples is usually related technically. For example Itosu shows how to perform a technique to the left and right of an opponent, and then shows a variation which should work from the front.

The katas are relatively "young" at around 100 years old so there has been relatively little time for them to become "corrupted". Some of the more advanced katas are several centuries old at least and it is more likely for "information corruption" to have been introduced.

In addition, the Pinans appear to be "themed" katas. For example:

The more advanced katas are not so simple to "decode", but starting with the Pinans is very good practice for the later katas.

However the techniques coded into the Pinans are certainly not "beginner" techniques or indeed techniques for children. Like all karate, they are quite dangerous. Example: The very first technique from the first kata is designed to dislocate an opponent's shoulder.