Kaisai no genri[1][2][3]is a set of rules of thumb which were used by the goju-ryu karate master Chōjun Miyagi to decode the Goju-ryu katas and find the original meanings within. Student of his Seikichi Toguchi brought this information to western attention in 2001 in his book Okinawan Goju-Ryu II: Advanced Techniques of Shorei-Kan Karate[4]. It's likely the same rules can be applied to other non Goju katas also. It is also likely that at least some of the rules apply also to White Crane kung-fu as Goju is heavily influenced by White Crane and karate generally is heavily influenced by kung-fu forms. 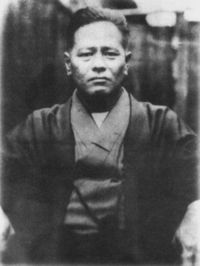 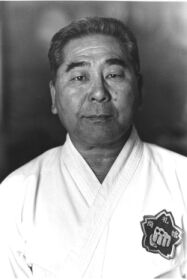 The theory behind Kaisai no genri is that Chinese forms began as simple paired drill sets with attacker and defenders. They would have been practising responses to common types of attack. As the numbers of different drill sets increased they became increasingly difficult to remember, so the defensive halves were concatenated into continuous sequences of movements: kung-fu forms. These then made their way eventually to Okinawa where they became katas. This means that Chinese kung-fu forms, and karate katas are likely made up of sequences of drills.

The implications of this are :

So primary applications to be found within katas would likely look something like:

There doesn't have to be three movements within a sequence, it can be more or less, but three appears to be common. The implication of the theory of Kaisai then is that kata have a very definite structure.

The rules which Miyagi used to decode the katas he knew are made up of three main principles, and many additional guiding principles.